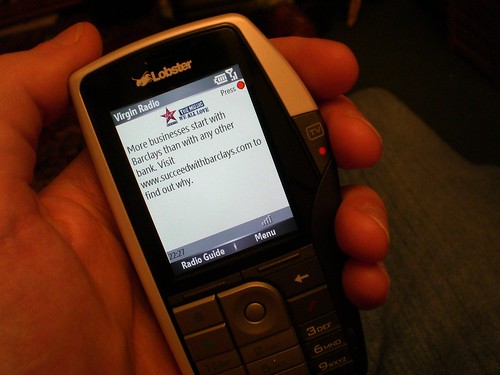 The Virgin Mobile ‘Lobster’ phone is an HTC-made Microsoft Windows mobile phone. I’m running a pre-production model (in fetching Virgin red), running Windows Mobile 5.0, OS 5.1.195. My experiences may not tally with the production model (in rather more sober and boring black). The phone is for sale at Virgin Mobile stores for £199 (pay as you go), or free with a contract from £20. Access to the TV channels are an extra £5 a month for pay-as-you-go, or free whilst on contract.

The phone software, with the exception of the ‘TV’ application (of more later), is virtually identical to my Orange SPV C600: with full Windows Mobile functionality, like an internet browser, text messaging, and other typical Windows things. There’s a special Virgin homescreen layout, some attempt at personalisation (like a custom start-up/closedown graphic and a home screen, but no further) but apart from that, there’s no major differences between the two. It ought to be mentioned that the camera application is rather better than on the SPV, but I don’t know whether this is a change in the standard Windows build.

In terms of the hardware, this phone uses the micro-SD expansion card, rather than the SPV’s mini-SD (micro is smaller than mini, it appears). The screen appears rather better, though it’s difficult to explain quite why. The main difference is the bulge on the right-hand side, containing the TV button (replacing the camera hotbutton on the SPV). Apparently, this is where the DAB chips have been added to the circuitboard. The headphone output is still a 2.5mm jack at the bottom of the phone, and there’s also a mini USB connection too.

The only other change is the headset: it’s not the standard one you get with a, for example, SPV. This headset appears better built, with a chunkier and sturdier plug, and thicker wire. It’s the antenna for the DAB receiver, so it might be that this is specially built for the phone; certainly, the test unit I had last year also had a special (and rather bodged) headset.

So, to the DAB functionality. From the additional software, “powered by Movio” (actually, powered by BT Movio, a section of BT), you can scan for new channels, and get a full listing. For me, I get four TV services and 49 radio stations.

Hitting ‘TV’ brings you to the ‘TV Guide’ section of the software, which shows the four channels available and the current programmes showing. The four channels available (nationwide) are BBC One London, Channel 4 Shortcuts, E4, and ITV-1 (London). BBC One London is in full and free. E4 and ITV-1 generally shows a simulcast of the main channels, but at some times of the day you get a notice that the current programme is unavailable for ‘rights reasons’ - which, at the time of writing, includes all of E4’s daytime music programming, all advertising, all of GMTV, and quite a few other programmes too: it’s unusual to be able to get all four channels in full, in my experience. Channel 4 Shortcuts shows short clips of Channel 4 shows, including the IT Crowd, on a rather too-short loop. It’s early days, and apparently BT have space for more channels, but it would probably be rather more interesting to show a rolling news channel, which is made for quick grazing. (Last year, the service showed Sky News, which would be welcome). The TV Guide also includes a fairly comprehensive electronic programme guide, which is provided over-the-air on DAB.

Clicking on a channel name opens a screen with a larger logo and a Windows Media ‘buffering’ sign, which disappears fairly quickly to be replaced with a passable picture. The framerate appears quite low - probably no more than 10 frames a second - and the picture quality does break up in fast movement; this isn’t picture quality to write home about, but conversely it is pretty good at coping with variable signal quality - on occasion, you can sometimes lose the picture but keep the sound. Watching live television in a moving taxi is an interesting experience, but works very well.

The radio stations are arranged alphabetically, and are (mostly) shown with logos. The DAB receiver copes well with the broadcast EPG services on some multiplexes; my unit currently shows programmes on the Digital One channels (like Virgin Radio), as well as those on some of the CE stations (notably Capital Radio and Xfm). Acquiring the EPG appears to happen while listening to a station on that multiplex; I guess that it’ll show the BBC EPG if I listen to that multiplex for long enough.

Clicking on a radio channel opens a screen which shows a larger logo, and the DLS (’scrolling text’) in full in the screen. The audio quality is as you’d expect from DAB - indeed, the headphones don’t do it justice - but what’s noticeable is, when walking outside, the reception is rock solid. Whether walking to the sandwich shop from work in central London listening to 6music, or walking home from the tube listening to LBC, there was barely any indication that I was listening to a radio and not an MP3 player. (Indeed, the reception quality is rather better than I’ve experienced with an FM radio). Radio listeners are also requested to ‘press the red button’, which initiates the inbuilt Internet Explorer browser to unerringly tell you that sorry, there’s no content yet. (That’s my job to fix, for our stations anyway).

The software also allows you to, with the headphones still in, listen to the radio on the loudspeaker. Surprisingly, this is a useful feature: allowing listening to the radio, in particular, while leaving the phone on a desk or table.

It’s no exaggeration to say that this is the best hand-held DAB Digital Radio that I’ve ever had - even forgetting the extra coverage put into place on the Digital 1 network by BT to boost the signal. It’s refreshing and welcome to see the scrolling text without it, er, scrolling; and full and natural support of the EPG is welcome and unusual. The interactive capabilities are interesting; the audio quality is excellent, and while the software can be fiddly, it’s has the capacity of replacing my iPod in certain situations - if the programming’s good enough.

And therein lies the problem. The TV channels aren’t really up to scratch. Yes, BBC One’s nice; but the others rarely show anything I’m interested in, or, worse, don’t show anything at all thanks to the rights issues. I can’t see too many people sitting down for half an hour of Coronation Street on this thing; and it would seem to me that the television offering needs changing - to offer more grazing-friendly programming. Sky News or BBC News 24 would be a great addition. The absence of GMTV on the phone shows what disarray the commercial broadcasters are in - why cede peak commuting time to the BBC alone?

If you’re on the lookout for a phone, you can’t go too wrong with Windows Mobile phones these days (I’m on my third), and this phone also has an excellently capable DAB Digital Radio inside it. Just don’t buy it for the TV. Just yet, anyway.