I’m in Mumbai for a radio conference, at which I’ll speak about new platforms for radio. If, of course, the conference goes ahead.

The first indication that something was a little up: a mysterious announcement as we taxied into Mumbai airport that we should stay in our seats and wait for an announcement about a ‘major incident’. People looked at one another. I leant across to my colleague and said: “It’ll either be a plane crash, or a terrorist bomb, or riots”. (There were riots here yesterday, though nobody was hurt.)

Because we’d not disembarked, the announcement, in English, seemed strangeley distant to us. “There’ve been more bombs somewhere in the world”, the announcement seemed to be saying. Six bombs on trains (the BBC are now reporting eight), and as a result Mumbai is experiencing severe traffic problems and mobile phone networks are very busy.

And then they read the announcement all over again in Hindi - and that’s when the realisation hit that it was happening right here, and perhaps the plane contained people who had members of their family injured or even killed, coming to meet them. Local train stations are a big part of Mumbai, and the guidebook tells me that at peak time, when these bombs hit, the trains are so crowded that “people hang out of the doors”.

Mahim station is the one closest to the hotel. They’re currently showing pictures of this station on the television - in bits. Earlier, on one of the indian channels, they showed limbs and a decapitated head strewn over the tracks. Clearly people are made of stronger stuff here. The screenshots here, incidentally, are from “CNN IBN”, a seemingly Indian version of CNN: there are over 80 channels on the hotel television; well over half are running rolling news, mostly in English. And it’s 2.30am.

We drove past a hospital on the way here: the casualty department was lit up, with people queuing outside. (I later learn that many Mumbaikars have gone down to donate blood).

Meanwhile, the hotel management were incredibly concerned for us. We glibly said that we were from London, and we were used to this sort of thing; the manager said “Well, we’re catching up with London in many ways.”

A friend of mine was called by the Australian media after the London bombings, and rather irritated them by telling them that the only things Londoners were a little peeved about was the fact that the tube wasn’t working, so they might be finding it a little difficult to get to work. “But surely they’re scared?” said the Aussie station. “No, not really,” said my friend, “just wondering how to get to work.”

After half a day wandering around Mumbai, it appears that Mumbaians are less worked up about yesterday’s dreadful atrocities than even the stoic Londoners were.

From the people we’ve talked to, and the general atmosphere, nobody is in the least bit worried about the bombings yesterday. This chalked sign in the ‘Victoria Terminus’, one of the main train stations, was the only outward sign of yesterday’s attacks: 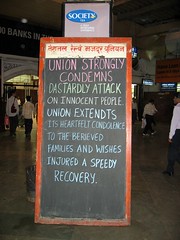 Let’s get this entirely clear. All the trains are running again, and have been since first thing this morning: and in comparison with London Transport Police’s heavy presence on the tube since 7/7, there was really no particular heavy presence; we visited Victoria Terminus (or, to give it its correct name, the Chhatrapati Shivaji Terminus) and saw two sole policemen in a station twice the size of King’s Cross. Really, honestly, there is absolutely no fear, no worry, no ‘beaten population cowering at home in fear of the indiscriminate bombings’. Much like the bombings in London, frankly, people have just been getting on with it. 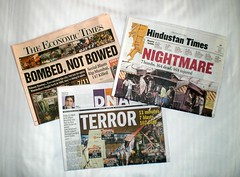 This isn’t just our impression: the media is full of this, too. The local Mumbai newspapers aren’t particularly worried about anything, either. The front of the Economic Times, “Bombed, not Bowed”, is the message that most of the indian television stations are putting out. One had a permanent caption this morning of something like ‘business as usual’, and even last night, the television channels were showing ’never say die’ as a caption below Mumbaians taking the bus to work.

On meeting with English colleagues this morning who’ve been in Mumbai for the past week, the only comment about the bombings was that it might take us a little longer to get into town as a result. Nothing else. 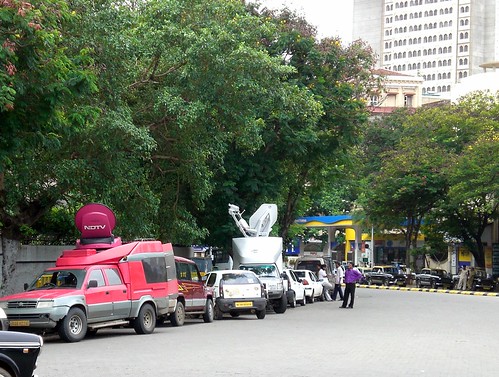 Yes, the rolling news is on in bars and restaurants. There’s a ton of sat wagons outside the police headquarters, as you’d expect (above). People are reading the newspapers; and doubtless they’re selling a few more today (below). It would be foolish to claim that nobody’s interested. 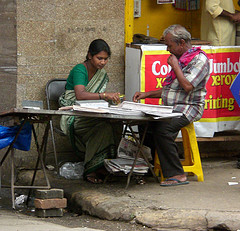 But, while websites like NowPublic have taken this blog and run with it, promising a whole heap of updates from me, the answer is, as always after these types of incidents: “Been there, got over it, life goes on”. There was a large set of bombs here in 1993, Mumbai’s so-called Black Wednesday, which killed around 80 people; the television is rerunning some footage of that, too - almost as if to say “Nothing new here”.

There really is nothing more to say. In London, there was a small flower garden, and hawkish missing posters. Russell Square was shut for weeks after the bombings with ominous big lorries. Here in Mumbai there are no roads closed, no policemen swarming over the financial capital of India, nothing untoward. Litter bins haven’t been taken away; and the bombings haven’t been used as an excuse to stop autograph hunters or anything as ridiculous as that.

If anything, it’s made me feel rather ashamed that we Londoners made such a comparative fuss about the 7/7 bombings last year: and I thought we’d done pretty well.

I’ve not been into Mumbai today. The hotel is in Bandra (West), which is a way away from the centre of town (around 45 minutes, since you asked); and I’ve been speaking in conference today, along with a colleague who did a fab job.

But it appears that there’s more to the Mumbai story than meets the eye; and perhaps some the cocksure bravado which was apparent yesterday might be covering up something more serious, if you believe the local newspapers.

The Economic Times seems to also agree: “Boom after the Blasts” “Mumbai’s back on the rails”

But others are slightly less gung-ho.

The Hindustan Times features a front picture of a set of business cards retrieved from the dead. It talks about the terror hunt - four saw the faces of the killers, apparently - as well as interviews with the drivers of some of the trains. Some are already back at work; others are “waiting keenly to resume duty”.

The Asian Age’s picture is of a weeping man, as it reports that the death toll is now over 200. The blame game has started - one piece points the blame at the two extremist political forces in Mumbai’s politics (there are riots here fairly regularly); the main story says that the Intelligence Bureau are tracing calls made to Pakistan and Afghanistan immediately after the blasts: inflammatory stuff, particularly given that Mumbai is a city of over ten million people - it’s probably likely that there are calls every minute of every day to those areas.

And The Times of India is almost entirely contradictory from the story in DNA. Nine separate pictures of weeping people above the fold on the front page - and two headlines: “How much more can we take?” and “Toll hits 200. City’s on edge, its fabled spirit flagging”. Page two is full of stories of grief and hardship, with the lives of over ten people who died being told. The lead story, rewritten for the web, says:

It’s different this time. Sadly. A day after the first serial blasts of March 12, 1993, Mumbai had been back on its feet - its never-say-die reply to those brutal dons earning awe and longremembered praise. But after 13 years of repeated bludgeoning, that spirit has dissipated. Terror Tuesday which claimed 200 lives and injured more than 700 has broken the city’s once-resilient spine.

This time around, Mumbai has not woken up with a bounce. It’s scarred, and scared. With no disrespect meant to the victims, it’s a toll that goes beyond the massacre on the peak-hour locals. Wednesday morning revealed a city weary and on the edge. For the psychologically battered Mumbaikar, the routine of battling through sardine-packed compartments has suddenly become an ominous game of Russian roulette. “Will I reach home safely tonight?’’ seemed to be the question on the faces of people who ventured out the day after. The normal chutzpah was missing as nervous commuters stepped aboard local trains, giving co-commuters a quick once-over, their eyes like mine-sweepers, checking for unattended packages on overhead racks or under the seats.

As an exercise, you might like to read the whole article, and then read the comments to it underneath. Perhaps this is the true story; and pride has got in the way of a needed re-evaluation.

Now, I don’t know, cossetted in this hotel overlooking dirty and filthy houses (which apparently cost over a million dollars, and are like palaces inside), what the mood is in the city. I’ll find out tomorrow, as we venture out again, visiting two radio stations and an advertising agency - the closest I’ll get to talking to real Mumbaikars. I know, thanks to a combination of lack of sleep, jet lag and a feeling of being rather hemmed in here in the middle of nowhere, that things appear rather less positive than yesterday. A good night’s sleep fuelled by hair-raisingly expensive Kingfisher lager may well help this mood disappear. (Six pounds a pint, incidentally! Bloody hell.)